Brief: In this first exercise, you’ll use fragments of still life images to create a combined design. • Arrange a still life set-up that includes a background (preferably an ironed white or black sheet) and three distinct objects. It would be helpful if at least one object was sized at least 0.5m or you’ll be photographing everything in macro.

• Use either sunlight from a window or one single source of electric light to cast shadows and bring out the 3D form of the objects.

• Photograph around the objects, both close and wide shots, not all from the front.

• Capture the edges and the lines of the objects as well as defined shapes within them – for example the sound holes of a violin.

• Capture edges where light and shadow create a sense of depth or recess.

• Take pictures of the textures and colours of the objects.

• Think of this project as collecting impressions and perceptions of these objects and let this guide your camera.

• You’ll need approximately 20 well-exposed images. The idea behind this exercise is to imaginatively combine the different photographs into a single conclusive design.

Have a look at some Cubist paintings and sculpture as inspiration. Notice how one object blends into another and how different viewpoints of the same object co-exist in surprising ways. The classic example of this is Picasso’s combination of the front and profile of a face, as in Weeping Woman, which you can see on the Tate’s website. Then look at Brendan Fowler’s Spring 2011 – Fall 2012 on the New York Museum of Modern Art (MOMA) website, which attempts similar arrangements using photography. Combine the photos by arranging prints or by using Photoshop to assemble the images as different layers. Cut the images and choose only fragments of each image, matching up lines so they flow and placing shapes in meaningful juxtapositions as defined points in the composition. You should find the composition grows into a large picture. When you’ve finished the design, photograph it or save it as a finished picture.

Process: My three still life objects were: a fake bonsai plant, a pair of metal antelopes and a resin Tiger.

My individual shots can be seen here:

I have chosen to depict a forest scene – primarily the relationship between the predator and the prey – also the various ways the Tiger ambushes its prey.

My chosen final image out of the three I attempted is: 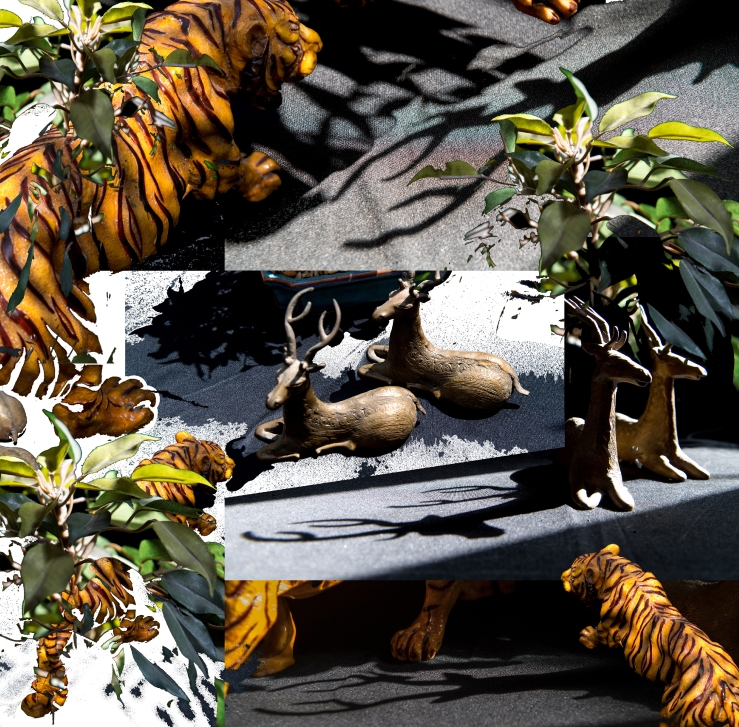 My other two attempts are:

Conclusion: The exercise proved to be challenging for me and I am not very pleased with the final outcome, even though what I have tried to depict has come out successfully.

I have used the natural sunlight as the one bright source of light during different times of the day to create shadows. I have incorporated a lot of shadows into my montage to create camouflage that is so important for the predator to make a successful hunt. Though “Attempt 1” is perhaps closest to depicting the various ways and tactics of camouflage and ambush, I felt it was a bit cluttered. I have tried to simplify it in my final attempt.